If you don’t have a snow cone machine… we highly recommend getting one. For a pretty small upfront investment, you can own a serious crowd-pleaser that instantly makes a summer party. And not just for the kids, but the grownups too: Boozy treats are just that much better when they’re slushy, right? Snow cone machines, right along with inflatable pools, laser tag sets, and hoverboards are some of summer’s most-wanted products, and we’re honestly all about entertaining the family from home these days (it’s safer and cheaper!).

True story: Several years ago, I received a snow cone machine sample to try out at home. I was psyched, but my clutter-phobic husband was convinced it would take up space and never get used — and he couldn’t wait to get it out of the house. But he was way wrong. (Which, means — hello — I was right, obvs.) That snow cone machine became the breakout hit of that summerAZXΩ and every one since. Ours gets tons of regular use when the weather is warm, and it still holds up great. So my PSA is this: Get a snow cone machine, crank that thing up (booze optional), and forget about adulting for a while. 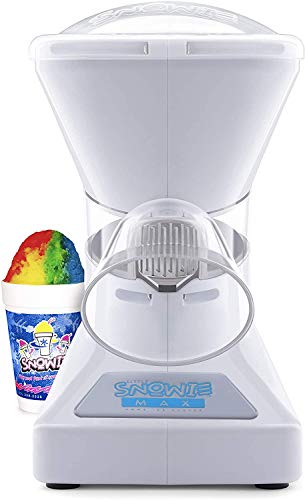 Little Snowie is basically the Cadillac of snow-cone makers: It’s super fast, making fluffy snow in just a few seconds with a professional-grade motor (that’s what you pay the big bucks for). It has an easy-grip handle so you can (and we have) toted it around to parties and barbecues to make boozy beverages, too. This kit also comes with six flavors, two mixing bottles with pour spouts, and eight reusable snow cone shovel spoons. 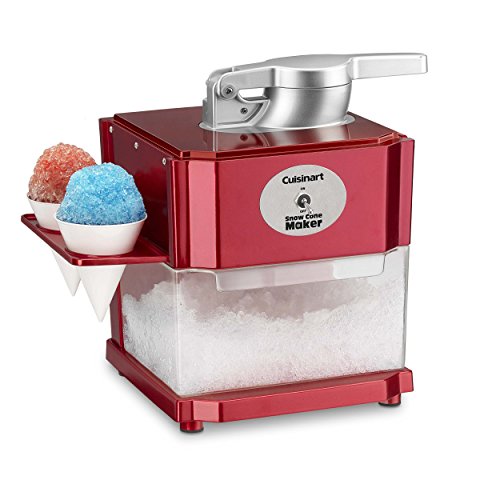 Cuisinart’s top-selling snow cone maker has more than 3,200 reviews for an overall ranking close to a perfect five stars. This cheery red machine is easy to set up and easy to use — just flip a switch to start shaving fluffy ice. It’s fast enough to make up to five cones in less than a minute. On the side, cone holders fold down so it’s compact and easier to store when not in use. This also comes with four BPA-free reusable plastic cones as well as 12 paper ones to get you started. 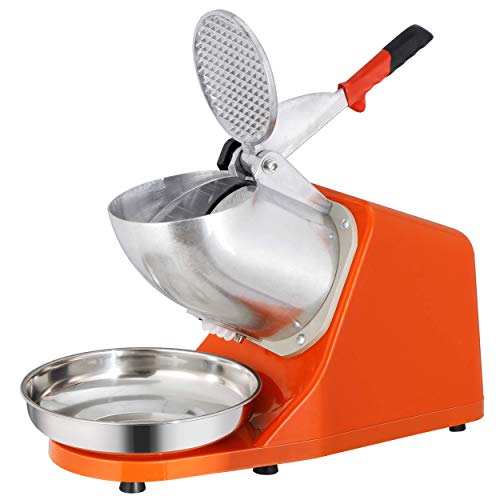 This sturdy machine has all stainless steel waterproof construction so it will hold up against rust — and years of raging birthday parties. The base is stable and whips up snow with relatively low noise, and it switches off automatically when the hopper handle opens for safety. A super-efficient motor can make close to 150 pounds of ice in an hour and a commercial-grade stainless steel shaving blade makes soft, fine pow pow. Plus, it just looks cool in the kitchen or yard, with a uniquely shaped orange body. 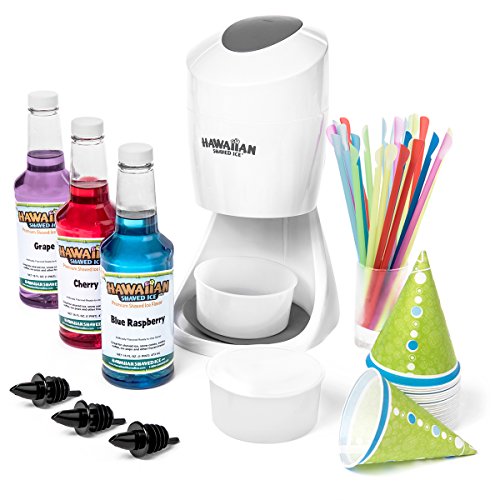 Press your eyes together and pretend you’re on a tropical island vacation. When you open them, you’ll still be in your humble backyard, sure. But at least you’ll be holding an authentic-tasting Hawaiian shaved ice that you whipped up in this compact and affordably priced machine. In addition to making fluffy snow, this machine comes in a kit that also includes snow cone cups, spoon straws, bottle pour spouts, and round block ice molds as well as three flavors of Hawaiian Shaved Ice brand syrups, known to be thicker and more potent than some of the others. 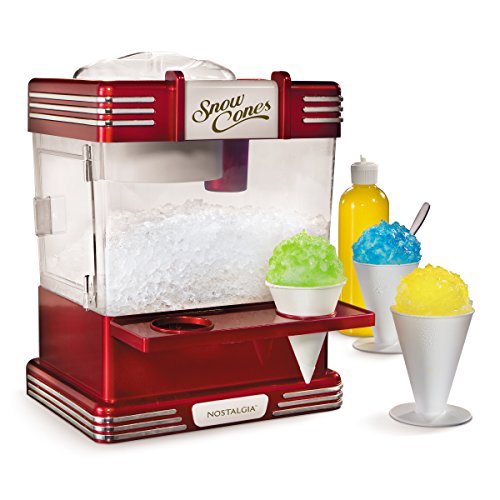 This nostalgic snow-cone maker in cheery red makes an eye-catching party station on your countertop or outdoor table. Stainless steel cutting blades work quickly shaving ice into fluffy treats for up to 20 cones at a time. With 360-degree all-around windows, it’s fun to watch the ice pile up as it shaves. Prep two cones at a time using the side shelf. 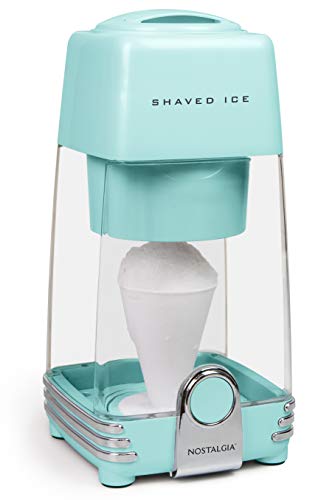 Hello, little cutie! This aqua-colored snow cone machine looks right out of a 1950s pool party paradise (or maybe a Vanity Fair spread done in that theme). It’s small enough for a side table, and has a 360-degree transparent chamber so you can watch the ice pile up as it works. (So satisfying.) The machine also includes a reusable plastic snow cone as well as a mold that doubles as a serving bowl for shaved ice. 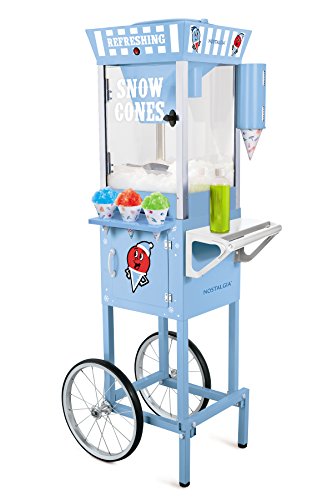 OK, but how committed are you really though? If you’re diving into the snow cone game full force, head straight for this floor-standing cart that holds enough snow for 72 cones. (YOLO, right?) This is the big daddy you want on hand for birthday parties, with stainless steel blades shaving two pounds of ice in just 90 seconds so you can keep that line of kiddos moving. Fill it up with regular-sized ice cubes, and watch the snow pile up through the clear chamber from all sides. A paper cone dispenser on the side makes serving groups easy, and a storage compartment in the base keeps all the supplies convenient. A side shelf holds three cones at a time while you pour the syrup on top. 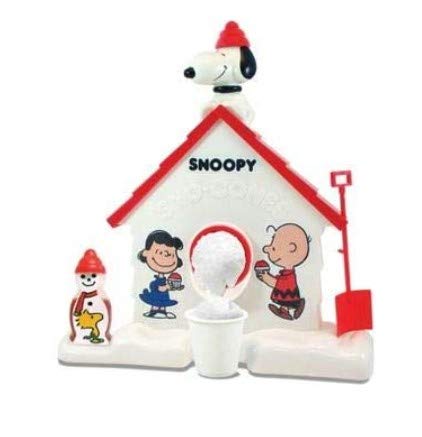 Just try not to smile when you remember this iconic snow cone maker from childhood: The Snoopy Sno-Cone Machine is an absolute O.G. The nostalgic plastic contraption is not exactly going to churn out the fastest or fluffiest cones, but the hand crank is safe and easy for kids to give it a go on their own — thereby extending the joy to another generation. 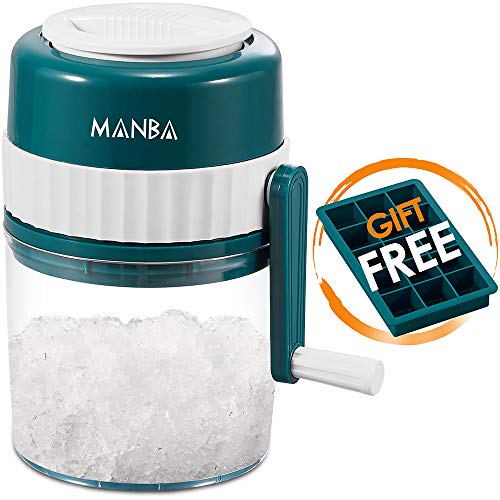 For the cost of a few snow cones at the beach or fair, you can be the proud owner of this baby — and make zillions (or at least a lot) of snow cones in the comfort of your own home. Sharp, high-quality blades won’t rust, and this small portable machine is easy to use, clean, carry, and store. Manual hand-crank operation is OK for kids to use, too. This also comes with a flexible silicone ice cube tray that makes cool cubical bricks for drinks, and releases them easily with a little twist. (Did somebody say cocktail hour?) 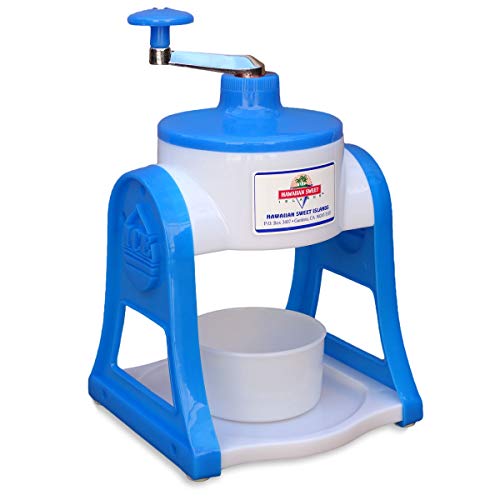 This super-affordable gadget is analog all the way — no batteries or electricity required. Kids or adults can manually operate the hand crank, customizing the ice shavings to their own tastes with the adjustable blade. The durable plastic snow cone maker is small, light, and easy to carry, so you can scoop it up and bring the party anywhere.

Although we only recommend picks we really love, we may earn a commission on purchases made through links from our site.