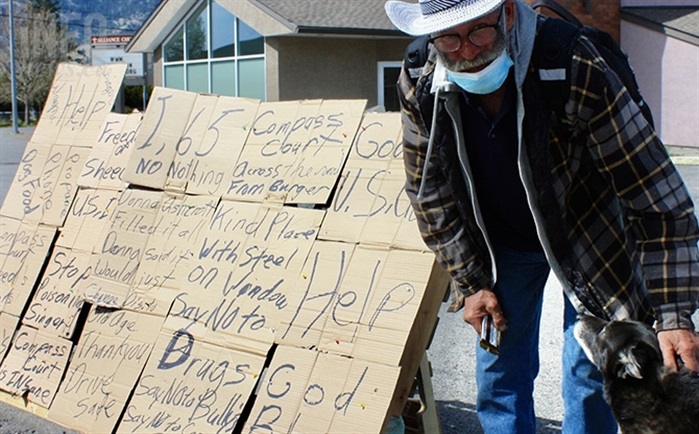 Wayne McFadden and his dog, Singer.


Wayne McFadden spends his days with his dog Singer sitting in a Penticton parking lot in front of a hand-made billboard made of cardboard and packing pallets.


By early afternoon he packs up his belongings and makes the trek back to his campsite somewhere along the Okanagan River Channel.


McFadden’s billboard contains a mix of messages, explaining his personal plight, while at the same time he tries to bring attention to conditions at the Compass House homeless shelter.


The 65-year-old is a bit of a square peg trying to fit into the round hole that passes for social housing solutions in the city these days.


“Singer and I stayed at Compass House for a month and a half. I thought it was a good place, but I knew, right off the bat, we didn’t fit in there,” McFadden says today, April 21, after returning from a nearby dollar store to upgrade his homemade billboard.


He says he quit drinking at age 32, but has had a few relapses since, the last one seven years ago. He hasn’t had a coffee in 27 years.


“I said a long time ago I wasn’t going to let that stuff run my life,” McFadden says.


He pulls a tin of sardines from a bag and opens it, setting it on the ground for Singer to wolf down before returning to his recollections of Compass House.


“Right away, I encountered a man doing drugs. I said to the lady in charge, ‘you can’t tell whether he’s coming or going,’ and she said, ‘it’s OK, they know how much they can do.’”


McFadden says he spoke to the man an hour later, and liked him, but after lunch, the man suddenly fell to the floor in convulsions.


“He was flopping around on the floor, like a fish, with everyone standing around in a circle, watching him. The ambulance came and took him, and he comes back, and he’s hardly in the door and the dealer is right there with more,” McFadden says.


During his stay, McFadden says illicit activity was taking place all the time, “right under the cameras.”


He says he’s aware of food being stolen from the kitchen coolers, and residents bringing all manner of goods into the complex, day and night.


“Bicycles, lawn furniture and gasoline, they just walk in the front door with it. It sits around for three or four days and gets thrown in the bin. I’ve heard there’s a guy in the south end of the city that will buy what they take,” he says.


McFadden says he was placed in a room with five others in it. Most of the rooms house seven or eight. For the first few days, a heroin addict kept coming and going “50 times a day and he’s turning the lights on at least a dozen of those times, and talking to himself.”


“I’m exhausted and I can’t get any sleep. You open the room door and there’s a needle lying on the floor. Why would you put an old guy like me in with someone like that?” he says.


McFadden says he enjoys moving around, working with animals, especially horses. He says he was “pushed through school.”


“I grew up on a farm, and learned to weld when I was seven. Around home (born in Chatham, Ontario) they called me an entrepreneur. I can teach any animal anything. I can teach a horse to deal cards but I was born cross-eyed. I have dyslexia and a touch of autism, I was really good at math but don’t read or write so good,” he says.


When he first arrived at Compass Court he was asked to sign a series of papers, told if he didn’t sign them he wouldn’t qualify to eventually get a room of his own. He asked repeatedly but was never told what it was he signed.


He believes taxpayers should know what’s going on in the shelter since they are the ones paying the bills.


McFadden and Singer had been homeless on Penticton streets for about 11 weeks prior to the Compass House experience. He had been living in his vehicle prior to that, but when his truck’s fuel pump failed while driving in Cawston, he couldn’t afford to fix it.


“People kept telling me I should go there, but it wasn’t long before I went, ‘wow, I’m better off staying on the street,’” McFadden says.


He’s been back on the streets for the past six months.


“Every time they’ve put Singer and I somewhere, we’re surrounded by junkies. If you’re paying $800 a month rent, you’re going to be surrounded by junkies. I ain’t doing that any more. They are mean to (Singer), they’re mean to me. I’m better off with a camper van and I can go where I want to go, when I please. And I can camp with the ducks, not the junkies,” McFadden says.


He stays in the city until lunch, then says he ‘gets tuckered out,’ so he goes back to camp, carrying his signage and other possessions.


Kim Cameron and three others are hoping to raise enough money for a camper van for McFadden and medical treatment for 12-year-old Singer.


The page was created yesterday, April 20, and has already collected more than $1,700.


Penticton’s Compass House is an emergency shelter with 30 beds for adults aged 19 and over operated by the Penticton and District Society for Community Living. The facility is open 24 hours a day and houses a low-barrier, wet shelter with an outside tent for inhalent use and an outside tent for alcoholic beverage and tobacco use. It advertises an 11p.m. curfew.


“Compass House is a low barrier shelter. They are not for everyone, that’s a problem,” Society for Community Living CEO Tony Laing says. “With an overdose prevention site and such, there is drug use that goes on. Compass House does allow people to use drugs while being supervised. I don’t know this person, I don’t know their story.”


He believes Penticton could use another shelter for those individuals who are trying to avoid drug use, whether from previous experience or those who have never used drugs.


Laing says the facility’s dorm rooms normally house four people to a room. He says that’s better than many other shelters, which consist of a single open dorm room. Single rooms are part of the facility’s supportive housing units, usually for longer-term residents.


Compass House currently has 20 single supportive housing units, with another 12 currently under renovation. They are expected to be available in July.


To contact a reporter for this story, email Steve Arstad or call 250-488-3065 or email the editor. You can also submit photos, videos or news tips to tips@infonews.ca and be entered to win a monthly prize draw.


We welcome your comments and opinions on our stories but play nice. We won’t censor or delete comments unless they contain off-topic statements or links, unnecessary vulgarity, false facts, spam or obviously fake profiles. If you have any concerns about what you see in comments, email the editor in the link above.